Wi-Fi is available at the VFW

History of the VFW “Buddy Poppy” 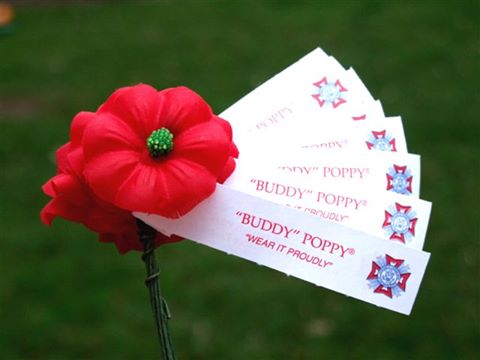 Twice annually Veterans of Foreign Wars (VFW) Posts from throughout the nation and overseas offer Buddy Poppies to the public for any type of donation. These donations are used for the VFW’s Relief Fund. The money donated can only be used for only eight different reasons.

The Veterans of Foreign Wars of the United States was the first veteran’s organization to promote a nationally organized campaign for the annual distribution of Poppies assembled by disabled and needy veterans.

The Poppy movement was inspired by the poem “In Flanders Field” written by Colonel John McCrae of the Canadian forces before the United States entered World War I. Selling replicas of the original Flanders’ Poppy originated in some of the allied countries immediately after the Armistice.

No definite organized sale of Poppies on a nationwide basis was conducted in America until 1921, when the Franco-American Children’s League sold Poppies ostensibly for the benefit of children in the devastated areas of France and Belgium.

Madam Guerin, who was recognized as “the Poppy lady from France”, sought and received the cooperation of the Veterans of Foreign Wars of the U.S. early in 1922, after the Franco-American Children’s League was dissolved. The VFW conducted a Poppy sale prior to Memorial Day, 1922, using only Poppies that were made in France. In the 1923 Poppy sale, due to the difficulty and delay in getting Poppies from France, the VFW made use of a surplus of French Poppies that were on hand and the balance was provided by a firm in New York City manufacturing artificial flowers.

It was during the 1923 campaign that the VFW evolved the idea which resulted in the VFW Buddy Poppy fashioned by disabled and needy veterans who were paid for their work as a practical means of providing assistance for these Comrades. This plan was formally provided for adoption to the 1923 encampment of the VFW at Norfolk, Virginia. Immediately thereafter the VFW Buddy Poppy factory was established in Pittsburgh, Pennsylvania, where all Buddy Poppies for the 1924 sale were assembled by disabled veterans.

General Frank T. Hines, Director of the U.S. Veterans’ Bureau, endorsed the plan and pledged the cooperation of his department. All men employed in the assembling of the Buddy Poppies for the 1924 sale were sent to the VFW Poppy workshop in Pittsburgh. The designation “Buddy Poppy” which originated with the men themselves, was adopted at that time. In February 1924, the VFW registered the name “Buddy Poppy” with the U.S. Patent Office, and a certificate was issued on May 20, 1924, granting the VFW all trademark rights in the name of “Buddy” under the classification of artificial flowers. The VFW has made that trademark a guarantee that all Poppies bearing that name and the VFW label are genuine products of the work of disabled and needy veterans. No other organization, firm or individual can make legal use of the name “Buddy Poppy”.

The National Buddy Poppy Committee has maintained a close check on the making of Buddy Poppies and has supplied VFW Buddy Poppy labels which must be used on all Poppies sold by any unit of this organization. The VFW has steadfastly adhered to the policy of veteran assembled Poppies.

From the very beginning, the Buddy Poppy project of the VFW has received the endorsement and cooperation of the Director of the Veterans Administration, and the support of administrations and medical officers of government hospitals. All Presidents since Warren G. Harding (1921-1923) have conveyed to the nation at large, endorsement and recognition of this VFW effort.

Today, VFW Buddy Poppies continue to be assembled by disabled, needy, and aging veterans in VA Hospitals and domiciliaries across the country. The majority of the proceeds derived from each sale conducted by VFW Posts and their Ladies Auxiliaries is retained locally to provide for veteran services and welfare. The minimal cost of the Buddy Poppies to VFW Posts provides compensation to the veterans who assemble the Poppies, provides financial assistance in maintaining state and national veterans’ rehabilitation and service programs, and partially supports the VFW National Home for orphans and widows of our nation’s veterans.

Buddy Poppy proceeds represent no profit to any VFW Post. All of the money contributed by the public for Buddy Poppies is used in the cause of veteran’s welfare, or for the well-being of their needy dependents and the orphans of veterans.

Greenwood VFW Post 5864 offers Buddy Poppies around Memorial Day, at the end of May, and near Veteran’s Day, around Nov. 11. One hundred percent (100%) of all money collected goes into the Post’s Relief Fund. All VFW members collecting money for Poppies are volunteers and are not paid and the VFW takes no money for administrative fees.

The Post Relief Fund was established by the National Veterans of Foreign Wars to aid those in need; sick and so forth. The information below concerning the Relief Fund is contained in the 2015 Podium Edition of the Manual of Procedures, Article II – Posts, Section 219 – Relief Fund, page 73.

The Quartermaster is the custodian of the Relief Fund and can expend money as directed by the Post. The eight purposes that the money can be used for include:

1. Aid, assistance, relief, and comfort of needy or disabled veterans or members of the Armed Forces and their dependents, and the widows and orphans of deceased veterans.

2. Maintenance and expansion of the VFW National Home for Children and other facilities devoted exclusively to the benefit and welfare of the dependents, widows, and orphans of disabled, needy or deceased veterans or members of the Armed Forces.

3. Necessary expenses in providing entertainment, care, and assistance to hospitalized veterans or members of the Armed Forces.

5. To perpetuate the memory of deceased veterans and members of the Armed Forces, and to comfort their survivors.

6. To foster true patriotism through historical and educational programs.

7. Remission of dues of sick, needy or disabled veterans.

8. Necessary expenses to from the Relief Fund, i.e., the purchase of Buddy Poppies.

Relief Funds may be invested in approved securities, but shall not be loaned to the Post or other units or transferred from the Relief Fund in any manner or under any guise.

Greenwood Memorial VFW Post 5864 is a non-profit organization dedicated to U.S. military veterans, their families and our community. Thank you for your interest in becoming a VFW member! Click the button below for more information!